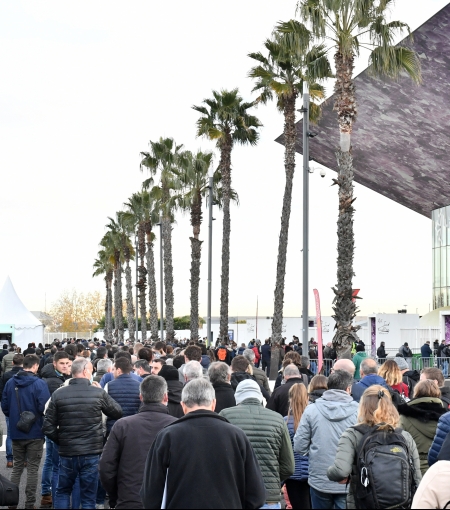 SITEVI 2021 has just brought the curtain down on three days of intense activity, marked by a healthy, business-oriented and convivial atmosphere.

SITEVI 2021 has just brought the curtain down on three days of intense activity, marked by a healthy, business-oriented and convivial atmosphere. Once again, the show confirmed its status as a benchmark trade event organised around the vine-wine, olive and fruit & vegetable professions, thanks to a rich and diversified offering (935 exhibitors from 18 countries) and a loyal visitor audience (51,000 entries from 61 countries).

This was endorsed by the French Minister of Agriculture Julien Denormandie, who inaugurated the show on Tuesday 30 November and highlighted the importance of such an event as a showcase for multiple innovations to address the challenges facing the three sectors. He also took advantage of this special occasion to announce a €380 million compensation fund aimed at winegrowers hit by frost attacks in April earlier this year.

A benchmark trade show with a rich and diversified offering

With 935 registered exhibitors hailing from 18 countries, including 171 new exhibitors, and 51,000 entries, SITEVI’s 2021 show kept all its promises. It confirmed the vitality of the three sectors and demonstrated the need expressed by professionals to come together and discover an ever more comprehensive offering, especially in the areas of new technology and new services.

“SITEVI 2021 demonstrated that the vine and wine sector continues to look to the future. It once again proved to us its dynamism, creativity and adaptability in view of the challenges of the future. Its stakeholders are driven by their passion.” Audrey Martinez, Winegrower at Domaine de la Vivarelle.

Professionals from all three sectors came together at SITEVI with multiple concrete projects. As a result, many orders were taken at the show. To illustrate this trend, the Business Meetings proved to be popular, success, with more than 500 appointments organised over the three days of the show. They helped visitors save time, meet new suppliers and find appropriate solutions to bring their projects to life. Finally, the “Top Buyers” programme conducted in association with Business France, gave exhibitors the chance to meet major buyers from five countries: Austria, Great Britain, Poland, the Czech Republic and Ukraine.

“SITEVI 2021 is a very positive edition. We are proud to have used it to launch our new NEXOS tractor. Visitors in good numbers and of high quality enabled us to build a healthy dynamic during these three days and write some orders.”
- Sébastien DEBORDE, Events and Media Relations Officer at CLAAS.

“We are very satisfied with our first participation at SITEVI. Our innovative and unprecedented concept of machine driving training simulator met with great success among manufacturers of farm machines, students, but also female tractor drivers - an unexpected target. Our Gold medal at the SITEVI Innovation Awards enabled us to build new partnerships, which was a key objective for us. We are looking forward to the next edition of SITEVI in 2023.”
- Romain SOULIÉ, Co-Founder and Director of Studio Nyx.

The enthusiasm for SITEVI could also be observed on an international level, despite the current public health situation and restrictions. Indeed, 23% of registered exhibitors were from European countries such as Austria, Belgium, Germany, Italy and Portugal… but also from further afield: Paraguay, USA, etc.

The same trend can be observed among the show’s visitors. SITEVI 2021 welcomed visitors hailing from 61 countries (top 3: Spain, Switzerland and Italy): proof, once again, of the appeal and diversity of the exhibition’s offering.

Revealing the innovations of the future

The SITEVI Innovation Awards shone alight on the most outstanding innovations in the sector. From among the 57 entries received, 31 were shortlisted by the judges and 16 products received awards (2 Gold Awards, 6 Silver Awards and 8 Bronze Awards). They reflected the diversity of the exhibition’s offering and illustrated its main trends: Digital tech and data capitalisation, Optimisation of cropping operations and processes, and Product innovation, commercial differentiation and eco-design.

“This 2021 edition of SITEVI has been an undeniable success for us. We had French and international visitors who were very interested by our ceramic wine vat 3-D printing innovation. Thanks to our Gold award in the 2021 SITEVI Innovation Awards, we established some excellent business contacts for future work projects. This healthy exhibition dynamic, together with this substantial interest from visitors, have brought us to decide to show again at SITEVI in 2023.”
- Quentin JOLY, Head of Research and Innovation at Biopythos.

Over the space of three days, SITEVI 2021 laid on features and special highlights to accompany its visitors. For example, the 50 talks and workshops, organised notably by IFV and the show’s partners, attracted a significant following, bringing together more than 2,000 attendees in total. The Tasting Masterclass Area, with its 23 sessions, enabled nearly 900 visitors to learn more about the vine-wine and olive growing sectors of the future. The Job Dating sessions organised by l’APECITA, Jobagri and Vitijob.com, offered 40 vacancies to 179 applicants interviewed. Finally, the Start-Up Village, a venue for expression and exchange, organised the first time in partnership with La Ferme Digitale and Agri Sud-Ouest Innovation, acted as a springboard for innovative young businesses working in agriculture (3D Aerospace, Agri Wave, Aptimiz, Azuvia, Cap 2020, Chouette, Elzeard, Lexagri, Mimosa, My Easy Farm, Scanopy, Winefunding).

Supported by the Occitanie/Pyrénées Méditerranée Regional Council, backed by the loyalty of its exhibitors and visitors, SITEVI has once again demonstrated the esteem in which it is held by stakeholders from the three farming sectors.