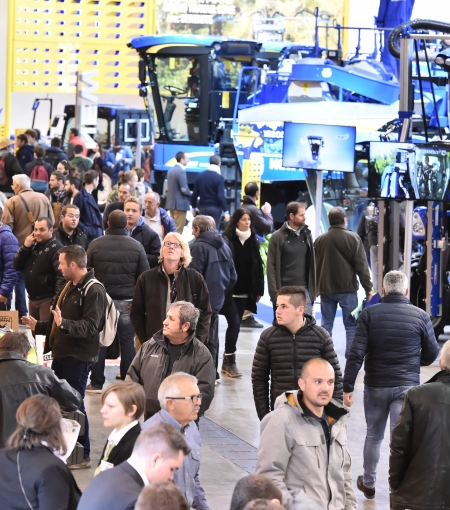 SITEVI, the exhibition of equipment and expertise for vine-wine, olive and fruit & vegetable professionals which took place from 28 to 30 November 2017, has recorded a significant increase in visitor numbers for the second consecutive edition. Over the space of three days, the show registered nearly 57,000 entries, representing a 5% improvement on the 2015 show. The vitality of this 28th edition provides clear confirmation of the commitment and confidence of these farming sectors at a time when crucial challenges lie ahead.

With 1,100 exhibitors from 25 countries (up 10% on the 2015 show) and a 19% increase in international exhibitors, SITEVI 2017 offered visitors a meeting featuring a wealth of innovation (more than 300 new products presented), dialogue and encounters, thus providing tangible responses to the concerns of the three sectors. There was a noticeable increase in the number of international visitors who hailed from 60 countries (versus 52 in 2015), offering proof of the exhibition’s appeal and wide-ranging offering.

For its 40th anniversary, SITEVI gave centre stage to services and special features to support and assist visitors in a pragmatic and efficient way:

LOOKING TOWARDS THE FUTURE!

During his visit to the show on Thursday 30 November, Mr. Stéphane Travert, Minister of Agriculture and Food, reasserted his support for these farming sectors. Meanwhile, the Chairwoman of the Occitanie Regional Council, Ms. Carole Delga, announced an investment programme in favour of the Montpellier Exhibition Centre, to be implemented in time for the next edition of SITEVI, scheduled for 26 - 28 November 2019.